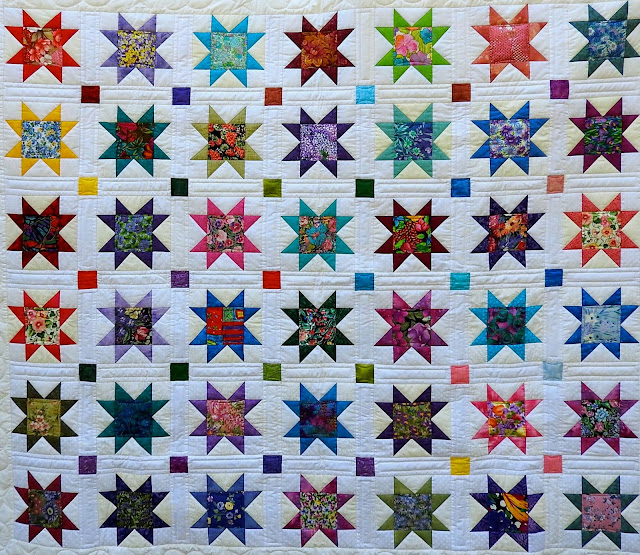 Among the many talented artists and crafters who are selling their wares at our 9th Annual Unique Boutique this holiday season, we have a group of quilters who will be donating their proceeds to local nonprofits, hospice groups and hospital patients.
Scrappy Quilters is a group that has been meeting regularly since 1993 at the Mt. Diablo Education Center in Pleasant Hill. Our gallery is filled with a wonderful selection of their lovingly made lap quilts and tote bags! They are also collecting donations with a raffle for a chance to win this gorgeous quilt.
Donate $5.00 for one single entry into the drawing ($10 for two entries, etc.) via PayPal by clicking here:  paypal.me/artcottageconcord.

Email ThisBlogThis!Share to TwitterShare to FacebookShare to Pinterest
Labels: Exhibit

If you haven't been by to see the current show yet, here's a sneak peek.

We hope to see you soon!

Tom Quinlavin is originally from New York and studied art at Long Island University, where he received a BFA in Painting. He had an art studio in his apartment in Manhattan for several years, before moving to Concord in 1999.

"I push the contrast between colors, shapes and movement (or rhythm) of what’s happening on the surface. Color and movement have an emotional value and I use that.

While sometimes I use recognizable imagery, my work is based in an abstract format. However, it’s not only about abstract concepts, but also how I see myself and the world around me. I continue to evoke emotions, moods and ideas. I just keep painting.

The Right Place at the Right Time was originally two separate paintings but I wasn’t quite satisfied with the results. Not that they weren’t strong works on their own, they just needed a little push. I tried turning them and then put them together, which really pushed Hans Hoffman’s concept of “Push and Pull.” They then became one."